When faculty mentors make all the difference

Growing up in Washington, D.C., Jordan Bellamy ’20 (pictured above, right) witnessed a cultural shift. As housing prices increased, the socio-economic makeup of her community evolved. What was once a dwelling place for people from many walks of life became less diverse.

These unsettling observations stuck with Bellamy, and eventually fueled her college trajectory. A Clarendon Scholar at Gordon, Bellamy is full-speed ahead chasing her vision for justice that was cultivated at an early age.

When Bellamy arrived at Gordon and met her advisor, Professor of Political Science Paul Brink (pictured above, left), his immediate reaction was, “Wow. Get out of her way. She’s on a mission.” And he says he’s done a lot of running to keep up since.

The self-proclaimed “implementer” chose an academic curriculum that would prepare her to tackle matters of political science with not only the practical tools to fix the how, but with the theoretical framework to understand the why. So, taking advantage of Gordon’s Kenneth L. Pike Honors Program, Bellamy is pursuing a custom-designed major in culture and political philosophy.

“I wanted to see how theory can be applied in a very concrete way,” she says. 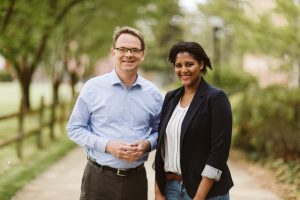 Bellamy eagerly pursued the opportunity to explore some of the questions she had encountered growing up when the Center for Public Justice (CPJ) awarded her and Brink one of three Shared Justice Student- Faculty Research Prizes. During the spring 2018 semester, the research duo investigated the effects of the increasing housing prices on the North Shore of Massachusetts, specifically in the city of Lynn. They asked, “What helps make communities thrive?”

On assignment from CPJ to study the effects of a local “social safety net program” through a public justice framework, Bellamy chose to research the housing choice voucher program within Section 8 of the Fair Housing Act of 1968. The voucher program is an opportunity for low- and very low-income families, the elderly and the disabled to afford housing in the private market, using vouchers provided by the federal government.

“The ability to participate in a private market is vital,” Brink says, “because that’s the key to allowing and enabling diversity, allowing mixed-income neighborhoods.”

In light of housing prices, though, the need for vouchers has outstripped the supply. Moreover, as rents have increased, the value of the vouchers has become insufficient. Housing remains out of reach for many of the city’s most vulnerable. Meanwhile, Lynn is faced with an additional challenge: spillover from Boston. New development in Boston is encouraging many to look to Lynn for housing, resulting in the displacement of local residents. And because vouchers are based on cost of living, Boston vouchers hold more value than Lynn vouchers, and longtime Lynn residents frequently find themselves outbid.

As Bellamy’s advisor, Brink has served as a sounding board and editor, helping her find ways to integrate the CPJ’s vision into the study. With a Ph.D. in political science from the University of Notre Dame, Brink’s expertise lies in political theory, especially theories of justice, faith and politics.

Brink directed Bellamy to back up and consider the larger questions that lead to a healthier community rather than applying quick, one-size-fits-all solutions. What does development mean? How should Lynn approach the issue of economic development in a way that encourages economic diversity?

“There has to be more understanding that each community is going to need a different thing,” Bellamy says. “And unfortunately, to my knowledge, Section 8 as a whole program is using a very one-size-fits-all model.”

Once their project concluded, Brink and Bellamy’s research was published as a scholarly article, “Reframing the Safety Net: The Housing Choice Voucher Program in a Changing Economy,” by Shared Justice. Bellamy also presented her research at the national meeting of Christians in Political Science in Georgia.

Bellamy’s project with the CPJ was not her first exposure to housing policy— the summer following her first year at Gordon, she had interned with the U.S. Department of Housing and Urban Development (HUD). Research with the CPJ, though, provided a unique opportunity, which she describes as “the actual melding between faith and works. It offered a solution of how I could bring my faith into politics, allowing me to live out the grace and truth of the gospel in a way that pragmatically pursues justice.”

“Jordan is clearly a student who has a lot of passion and a lot of drive,” Brink says. “The longer you’re working with a student, the more the role of the professor becomes less of actual content and more of guiding and nudging.” In turn, Bellamy says her greatest takeaway from Brink (so far) is “to listen more and to be a person who receives information so I can understand the why of a situation in order to identify good questions.”