Re-digging the wells of Gordon College | A devotional

A well provides a life-giving supply of water. Digging one is a costly, emotional act of faith. It’s hard labor propelled by the belief that down in that hole the water table waits. Like with many difficult tasks, finding water is terrifically rewarding.

A well is about more than water. It’s the symbol of a thriving community, and there are things in this world that do not want communities to thrive. Genesis 26:12–33 tells a contentious story of wells during a time of famine, when God commands Isaac to remain in the land of his father, Abraham, and dig for water. The land is blessed because of a promise that God made to Abraham and Isaac is, therefore, blessed in his gritty task.

Abraham dug and defended wells that flourished—and his enemies despised it. When Abraham died, the care of the wells passed away with him. The Sea People from Caftor elbowed in and stopped up those wells, destroying the life-giving power. Years later Isaac inherited the challenge to restore and renovate the wells. When he did, he too faced opposition from the Philistines. They drove him away from his wells. So, Isaac directed his community toward the difficult task of re-digging Abraham’s wells. Once again, the Lord fulfilled his promise to prior generations, and Abraham’s act of faith long ago bore fruit.

Our faith can be encouraged by those who came before, who dug deeply for wells and struck an aquifer. The faith of prior generations again bears fruit, though they do not live to see it. 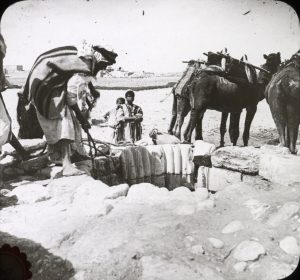 With the encouragement of success, Isaac faces new opposition over the water. Amid the tension, Isaac must move on from his father’s wells and continue digging, sometimes successfully, but sometimes walking away from wells others have claimed.

Determined to obey the Lord and provide for his people, Isaac boldly goes where his father had not gone before. He finds that, in this exercise of faith, God rewards him with an unexpected partner. There in Beersheba and in need of a well, Isaac is met by the very enemy who he encountered in his father’s land. But instead of opposition, the enemy proposes a treaty, having witnessed the Lord’s favor on Isaac. Then Isaac’s men come with a report: they have struck water.

Sometimes with God’s favor in digging a well, he brings a surprising partner who shares interests or a vision, resulting in a peaceful encounter over a new venture.

The Faith Rising campaign echoes Isaac’s journey in its own way. We, in our generation, must look at the work of prior generations who dug deeply, found water and manifested it as a well. Believing the same God, we must proceed with faith in his purpose for Gordon. God will be faithful in his promises.

Yet as Isaac found, the labor of prior generations doesn’t always stay with its intended purpose. James Turnstead Burtchaell’s book, The Dying of the Light: The Disengagement of Colleges and Universities from Their Christian Churches, illustrates how some Christian colleges in the United States have abandoned the deep wells of truth previously dug, succumbing to crises and losing their water. Faith communities learn that when an enemy comes and brings strife, we might not reclaim our well, and it is disposed for other purposes. God’s promises do not guarantee that we will keep all the wells our predecessors poured out life to dig.

This is a time to apply ourselves and do the labor set before us. The Lord has served Gordon in the past, and he’ll serve again. In this campaign, let us trust God and create space for faith-borne partnerships that enable the digging of wells. We ask for God’s blessing in this labor, even as we lean on his promises.