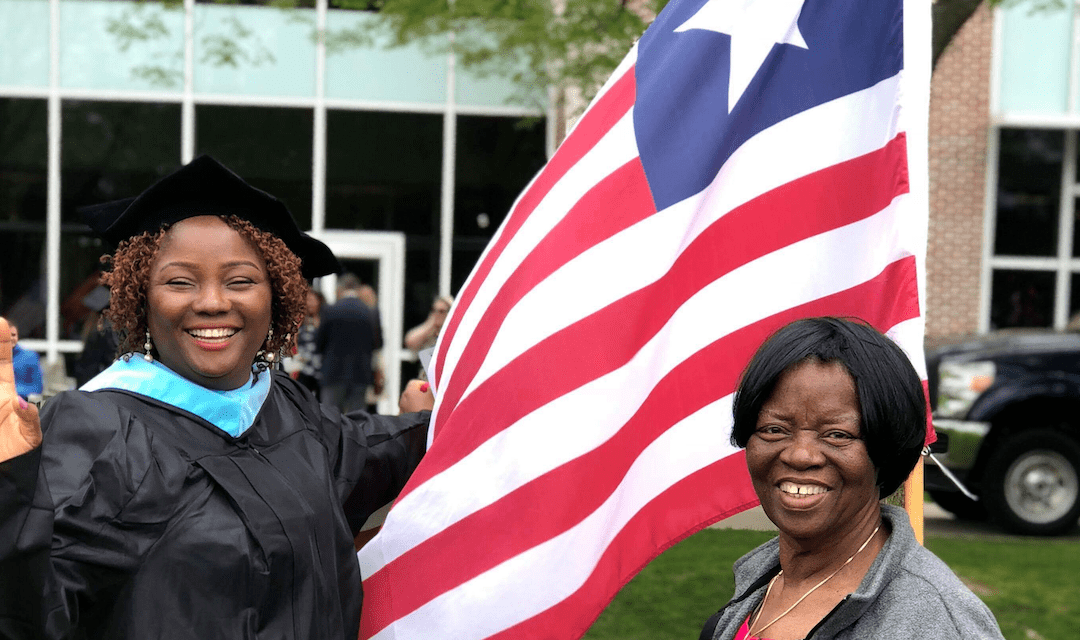 In 2003, Ollie White ‘18 fled her home country of Liberia due to civil unrest, taking along her 5-year-old daughter Joy in search of a better life. Together, they found refuge in Massachusetts where Ollie’s mother lived, and both began pursuing education.

Ollie held a Bachelor’s from the Liberia Baptist Theological Seminary, which she obtained just after being named Miss Liberia in 1988.

“I didn’t know how long it was going to take for the war to end. Instead of just sitting and waiting indefinitely, I decided to continue my education,” said Ollie as she reflected on her thoughts after arriving in Massachusetts.

That’s when Ollie found Gordon-Conwell Theological Seminary, where she chose to enroll in the Master of Arts in Educational Ministries program. For her elective credit, she took a Principles of Reading course at Gordon College, where Ollie encountered the Fundations® program, the same program her first-grader Joy was learning at her Christian school.

The comprehensive, research-based approach to reading was wildly different from the traditional approach Ollie had experienced back home. “The teachers in Liberia never knew how to teach reading,” she said. “It was mostly memorization, and that’s the culture.”

After graduating with her Master’s from Gordon-Conwell Theological Seminary in 2007, Ollie decided to return home to Liberia and use what she had learned to launch “Beautiful Beginnings,” the educational branch of her already-established Foundation to Activate Children’s Empowerment and Spirituality (FACES) mission program.

Forty-five students enrolled in the first year, and 150 joined the second year.

Others outside of her community took notice, too.

Ollie was quickly recruited by the Research Triangle Institute, headquartered in North Carolina, to provide training for Liberian government teachers under the Early Grade Reading program. She hired a staff to help run her fledgling school and began working with government teachers to improve reading instructional delivery in public schools through training and curriculum development.

In 2013, six years after her return to Liberia, Ollie realized, “Just one course from Gordon College has done so much. What would it be like if I did a full program in education?”

Unfortunately, due to the West Africa Ebola crisis, Ollie’s school was closed down. But that didn’t stop her. She and a team of young researchers converted curricula from Beautiful Beginnings and the Liberian public schools and created a home study program so that students could continue to learn.

As the Ebola crisis subsided and life returned to normal, Ollie was offered a position designing reading programs as an education specialist with USAID. She played a lead role in developing an activity called Read Liberia, which is being implemented in 640 public schools for the purpose of training teachers and district educational officers.

At the same time, she made good on her plans and officially enrolled in the graduate education program at Gordon. The five-hour time difference between Wenham and Harbel meant logging on for class late at night, and the spotty Internet meant that sometimes she’d be at her school, sometimes at home, sometimes at a friend’s house—wherever the connection was strongest.

But true to form, Ollie persisted. She graduated in May of 2018 with an Education Specialist in Leadership degree.

Today, Beautiful Beginnings has 470 students and 35 staff. Its activity-based learning center was funded by the German Embassy under the leadership of Ambassador Ralph Timmerman and his wife, Renata. Ollie has since been recognized by the Liberia Ministry of Education and the Office of the President of Liberia, under Madam Ellen Johnson-Sirleaf.

Ollie’s continual legacy is a living representation of Gordon’s dedication to equipping its students to follow their God-given callings, no matter their background or where they are in the world. What began as one elective course taken at Gordon has since grown into a cross-continental impact that is changing lives, from little children all the way up to government officials.

Ollie is one example of why Gordon has launched its Faith Rising: The Campaign for Gordon College, an initiative created to make inroads for students to achieve a quality, Christ-centered education. With Faith Rising funds, more students like Ollie can obtain the education they need as a launching pad for going out into all the world, making a difference for the name of Jesus.